Video Production and Campaign for Design and Ver.Di NGG

The issue of a legal, nationwide minimum wage in Germany has always been a key issue on the agenda for the United Services Union Ver.di. 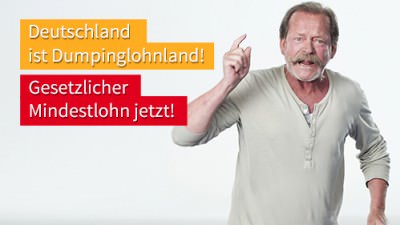 At the federal elections of 2013, ver.di and the Food and Catering (NGG) union decided to set up a viral video and social media campaign in cooperation with dot-gruppe for minimum wage.

Dot-gruppe produced three videos that show the effects of poor pay on different workers. After a long day of shooting and the subsequent post-production, the viral videos were published on the YouTube channel. The Viral videos show sufferers who have struggled to be able to live on their wages and salaries. Workers of different professional groups were approached by the campaign in order to be mobilized and join unions to promote comprehensive, statutory, minimum wage.

Because dot-gruppe was responsible for the entire campaign, we made a landing page to be reached by prospective members. The strategic promotion and video seeding was done by dot-gruppe, in order to achieve even more coverage and gain the attention of target groups.